Chuka ryori (中華料理) refers to Japanese-Chinese dishes which originate from China, but have been adjusted to fit the style and taste of the Japanese palette. Dishes that belong to this group are for example ramen, gyoza and harumaki.

What is Chuka ryori?

Chuka ryori (中華料理) refers Japanese dishes that have their origins in China. However, the dishes are still uniquely Japanese, as they have often been adjusted to fit the style and taste of the Japanese palette — for example, by making the more fiery dishes milder. Dishes that belong to this group include staples, such as ramen, gyoza (dumplings) and harumaki (spring rolls).

Ramen is today viewed as a national Japanese food. There are common variants found in most standard ramen shops, as well as more local versions in different parts of the country. Two examples being Hakata ramen, which is a type of tonkatsu ramen, and seafood ramen in Hokkaido. Not only are there local varieties, but individual shops may also have their very own secret recipes. 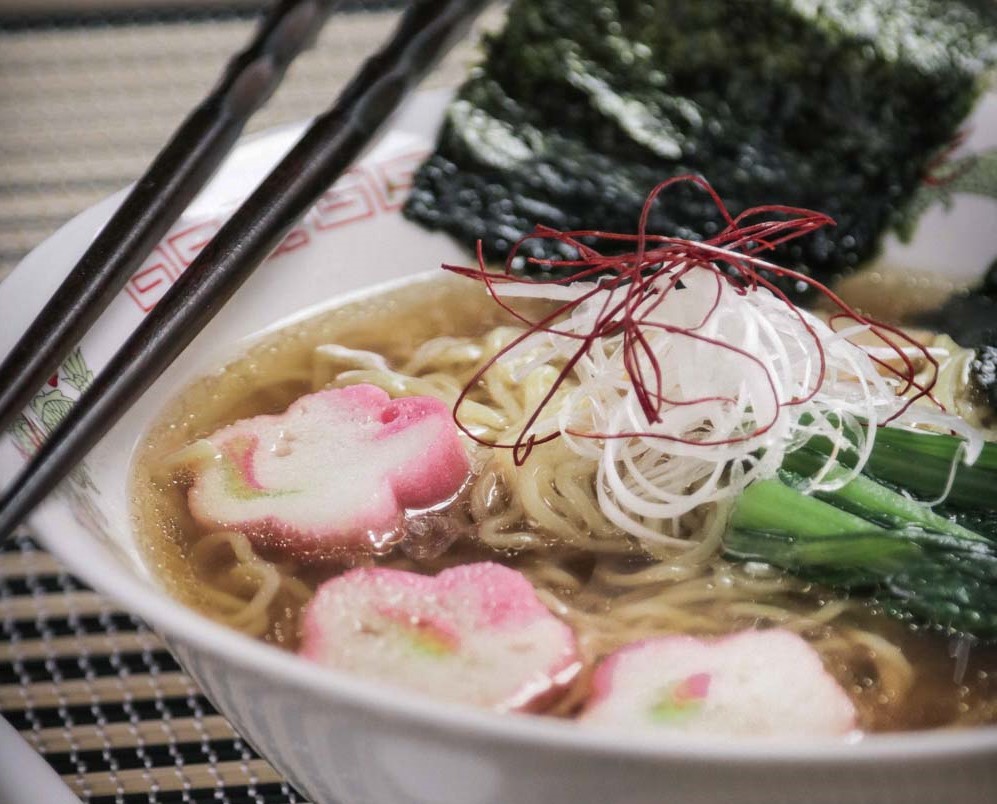 Ramen does commonly not come vegan in restaurants, however, in recent year plant-based food has risen in popularity in Japan and opened up a space for vegan and vegetarian ramen options, such as the vegan ramen restaurant T’s Tantan in Tokyo.

If you feel like eating ramen, but don’t have any ramen noodles at home you can always boil some spaghetti or angel hair pasta with baking soda.

There is a large variety of dumplings around the world. Many countries have their own specialties and ways of creating them. In Japan dumplings are called gyoza and they are a beloved part of the Japanese cuisine. Go to any izakaya or ramen restaurant and you will find these half-moon shaped treats on the menu. They often come served as a fried side dish, filled with either some type of meat or vegetables (mostly the ones served in restaurants are not vegan-friendly as they tend to contain a mix of meat and other fillings). Many Japanese enjoy gyoza as an evening snack while drinking after work, but they can be eaten at anytime, with or without alcohol.

There are several theories on exactly how gyoza became a part of Japanese cuisine. However, the dish originates rom the Chinese dumpling jiaozi. Both gyoza and jiaozi are filled with meat or vegetables and are then wrapped in a thin flour dough – the largest difference is the choice in cooking method. The fried variety (焼き餃子, yaki-gyoza) is the most common in Japan, however, in China they are often steamed or boiled.

Gyoza rose in popularity with the return of Japanese soldiers after the second world war and today they can be found in eateries serving chuka ryori, ramen restaurants and there is also a selection of specialist shops mainly focusing on serving gyoza.

Gyoza is an easy dish to veganize as the dough does not require an egg or milk components. Likewise, the filling can be adjusted to fit a plant-based diet by changing up any meat ingredients to plant-based options. 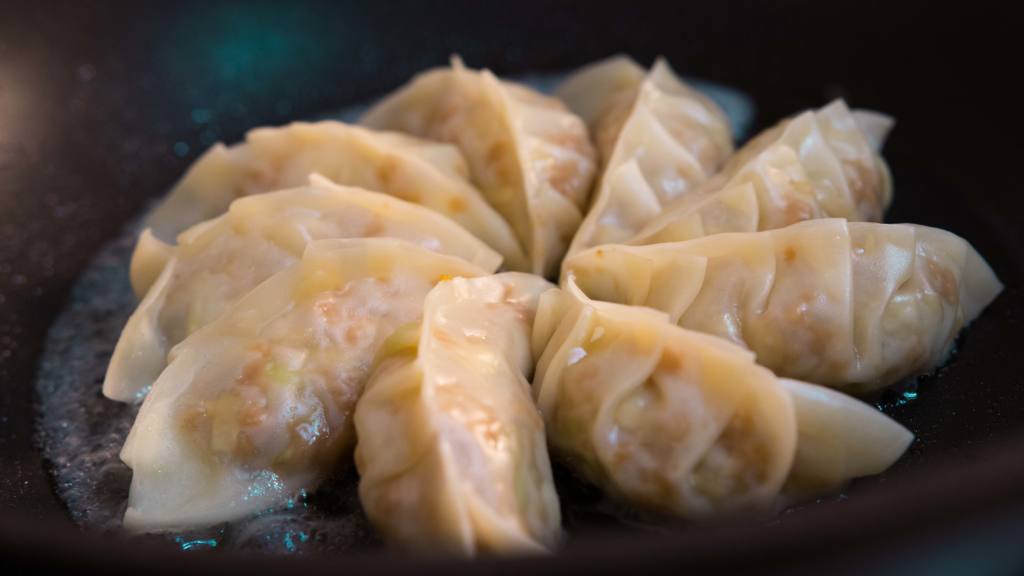 All you need is water and flour to make the gyoza wraps in this tutorial. Getting all the wraps done will take some time, but the end result is worth it. Happy cooking!

Similar to gyoza, this is a dish that is not to complicated to veganize. Switch out the meat ingredients in the filling to plant-based alternatives and you are good to go! 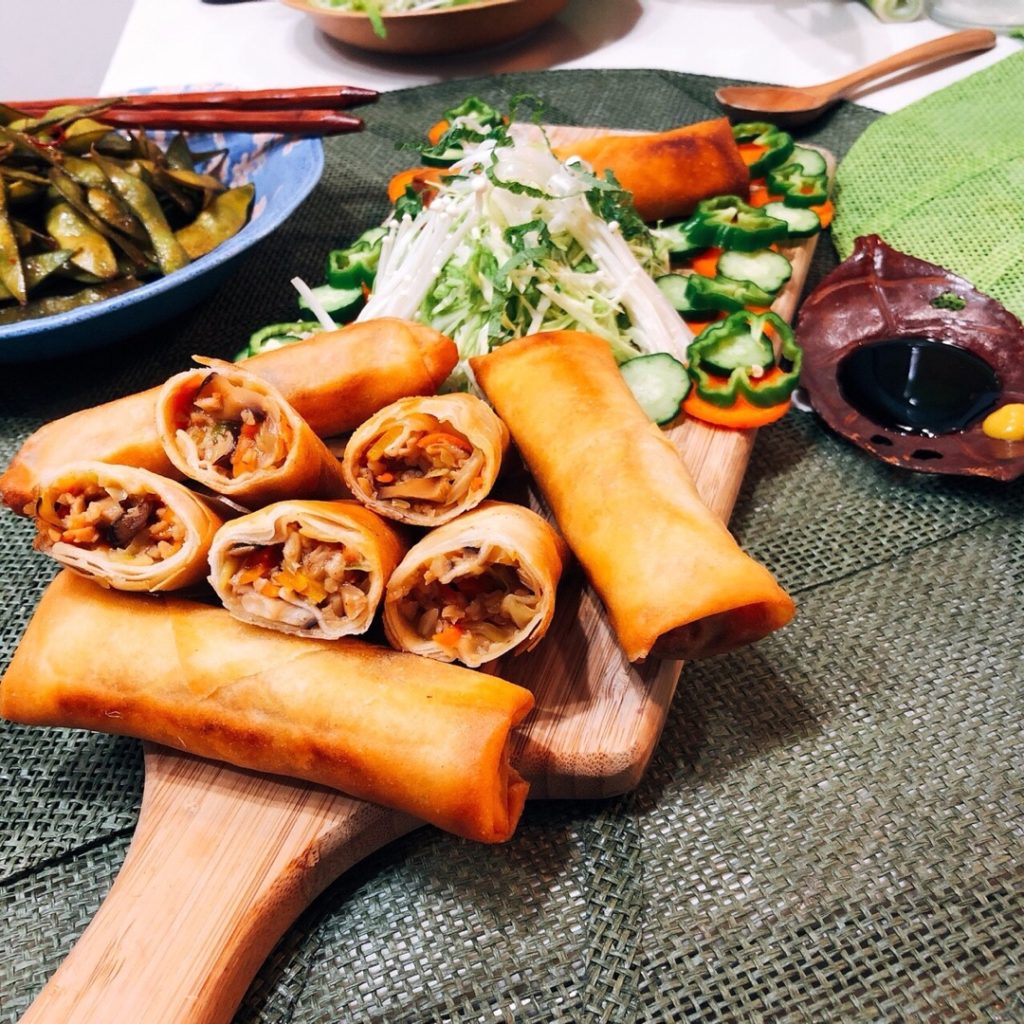 You can fill these delicious spring rolls up with any ingredient of your choice and enjoy a deliciously crunchy snack.

Join one of our online cooking lessons to learn how to make a full vegan ramen and gyoza/ harumaki meal! Our Japanese cooking instructor will teach you how to make the dishes and answer all your questions about vegan food in Japan 😊 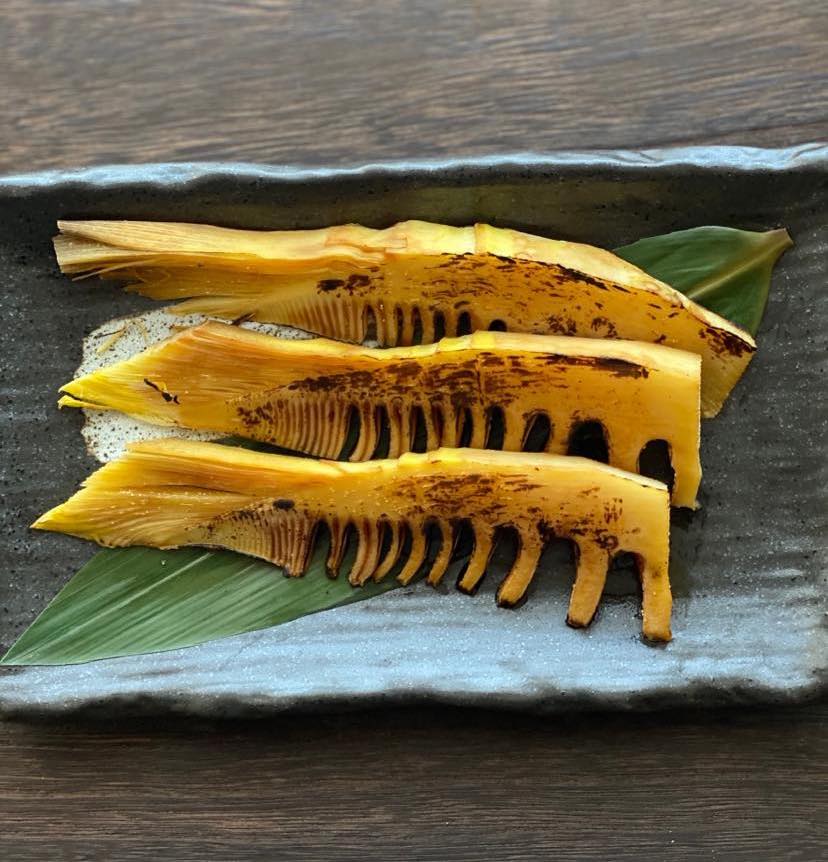 In Japan, the vegetable and fruit selection changes with the seasons. Seasonal vegetables are often budget-friendly and a great way to add variation to your cooking. 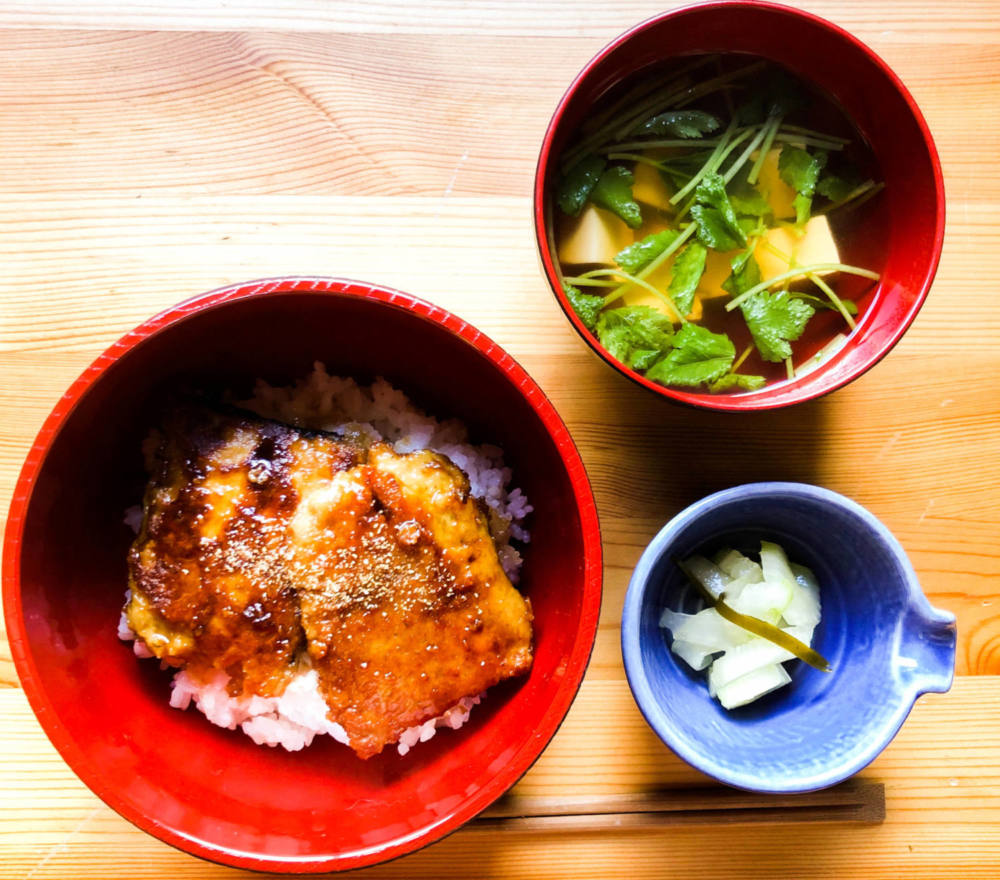 Modoki ryori refers to food which uses plant-based ingredients to mimic the appearance, taste and texture of meat dishes. This type of dishes are common in shojin ryori and they have also achieved a certain mainstream popularity due to the health factor of eating vegetable-rich meals. 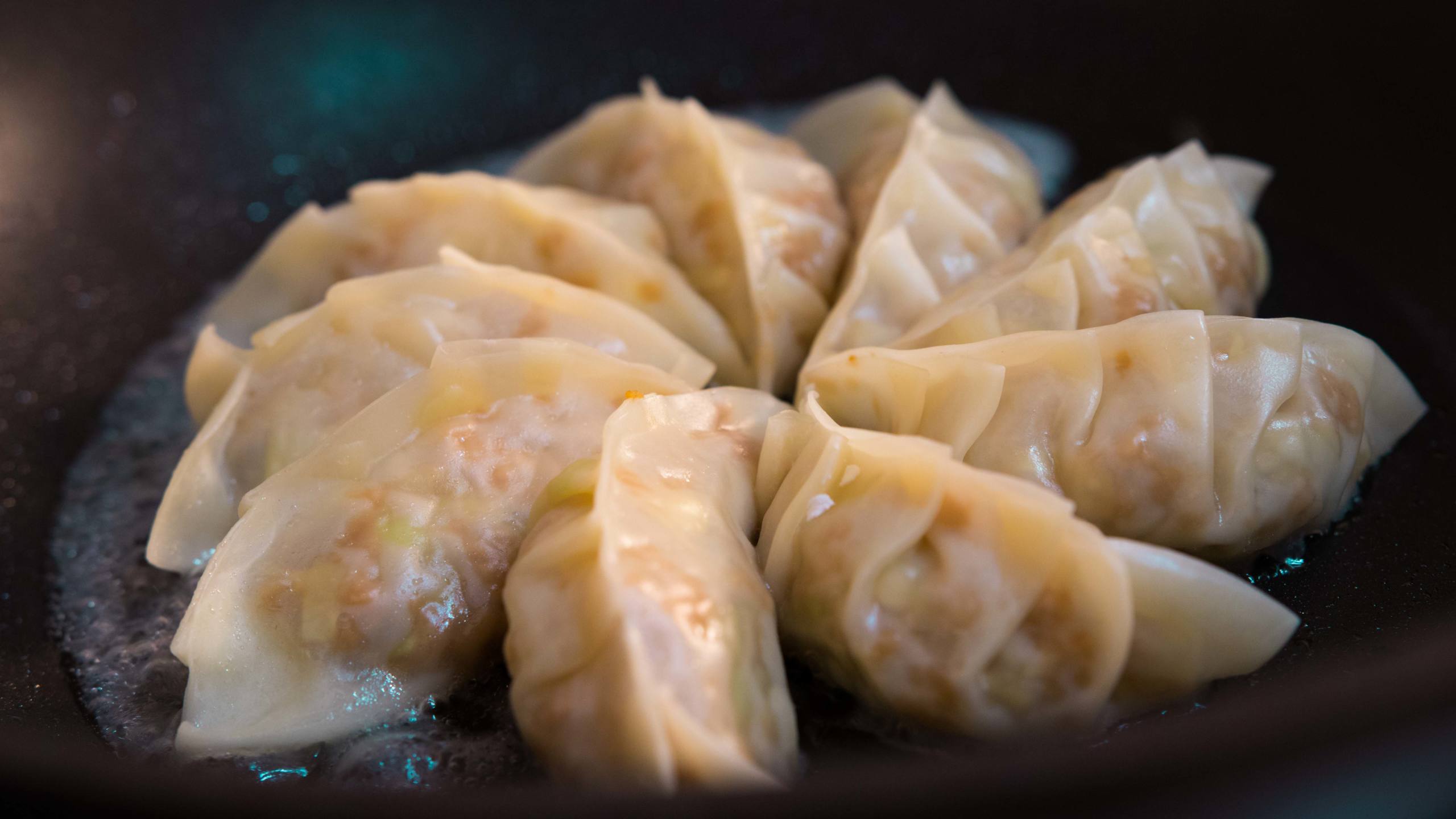 Chuka ryori (中華料理) refers to Japanese-Chinese dishes which originate from China, but have been adjusted to fit the style and taste of the Japanese palette. Dishes that belong to this group are for example ramen, gyoza and harumaki. 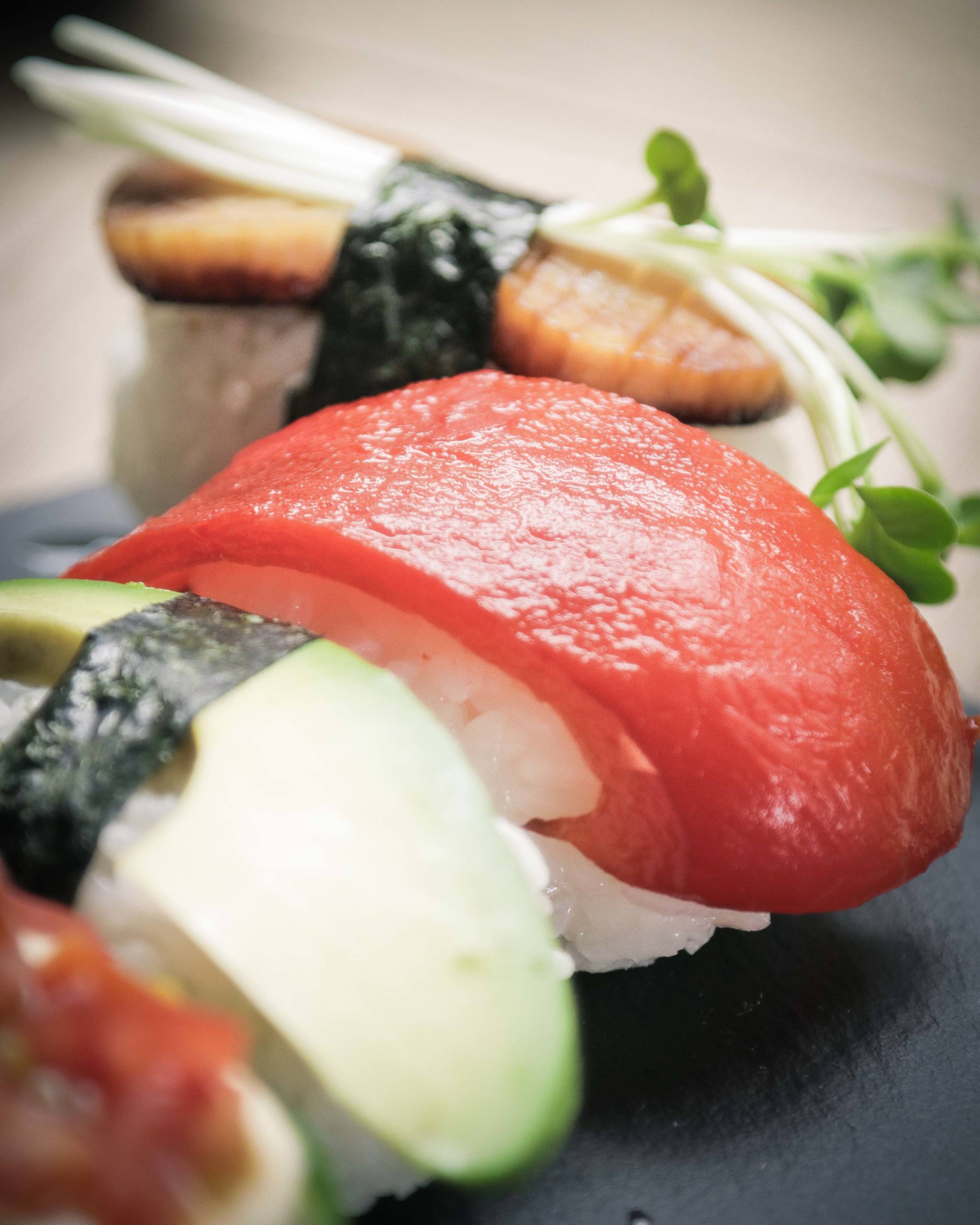 BentoYa has partnered with Veecoco, one of the leading platforms for online vegan cooking courses, to offer an exciting (and delicious) course on authentic vegan sushi and ramen.

Sign up to our newsletter and get our latest recipes, cooking related content & offers delivered right to your mailbox!